You are here: Home » Shop » CDs » Clive Mitten – Tales From A Misspent Youth – Volume I (PRE-ORDER)

Clive Mitten – Tales From A Misspent Youth – Volume I (PRE-ORDER) 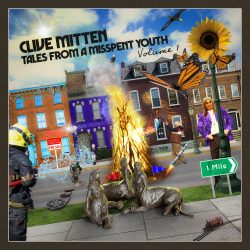 We are delighted to be able to announce the forthcoming release of Clive Mitten’s second solo album Tales From A Misspent Youth – volume I.

Clive’s latest project sees him covering, in a fully orchestral style, some of progressive rock’s greatest tracks; ones that inspired him as teenager, to create something entirely new. The double album includes some of the best-known artists and some of their best-loved songs, beautifully interpreted, in what we hope will be a series of releases. This first volume includes tracks by Pink Floyd, Genesis, Rush, Peter Gabriel, Jethro Tull, Mike Oldfield, and Supertramp!

It is being issued as a double CD. The scheduled release date is the 28th January 2022

Here’s what Clive himself is saying about it…
“14 months in the making, this album is my tribute to those who inspired me in my teens to become a musician. I could already play the piano and classical guitar, but aged 12 I encountered ‘prog for the first time. I saw Pink Floyd play Dark Side of the Moon live, and watched Supertramp perform Crime of the Century before most knew who they were – all while wearing a great coat and carrying a crate of Newcastle Brown with me. These experiences and others led me to electrify my playing to work out what my heroes were doing. Now, 50 years later, I am paying my dues to them in my current style, which you can loosely define as cinematically orchestral but with an in-depth understanding of prog. Why take this on? The originals are complex works which are fiendishly difficult in places and already well-loved. Lockdowns are part of it, but the main reason is that I feel I can shine a new light on the material – and in places it is an unexpected light. This album has been a labour of love, both for the people who drove me to write music in the first place and led me ultimately to being able to call myself a composer, and, as always, for the music.”

It is being released in a jewel case as a double CD and, as you can see, runs to just over two hours. It will be accompanied by a booklet containing comprehensive sleeve notes written by Clive explaining the concept of the album, and giving detailed information about the tracks.